Bino and Fino on the BBC Big Screen

Bino and Fino are coming to a Big Screen near you! Well if you are in the UK at least. Bino and Fino will be as part of the Africa in Motion film festival. The festival will be shown on the BBC Big screens at 19 sites across the UK. So you’ll get to see Fino’s afro puffs in mega widescreen on your way to Tesco’s! UK fans will get that. :- Screenings will be 10am, 2pm & 7pm daily (except when there are special screenings or events) . Bino & Fino will be in there somewhere.

‘Big Screens bring 23 communities across the UK to life. The Big Screens are brought to you by the BBC and UK local authorities.

They are a destination for news, live coverage of BBC sport and music events, highlights of BBC programmes plus an ever-changing selection of local and national digital work and a full programme of locally run community, sporting and cultural events.’

This picture is a mock up by the way we did in the studio for fun.

Posted on October 9, 2012 by BinoandFino

Many of you have asked where in the world are Bino and Fino’s parents. Well let’s just say they were away for the 1st few episodes 🙂 . Here are pictures of the family as they will look in the coming episodes. There might be some minor changes in their designs. Also don’t forget to check out the Bino and Fino crowd fundraiser!  We’re up to $880! 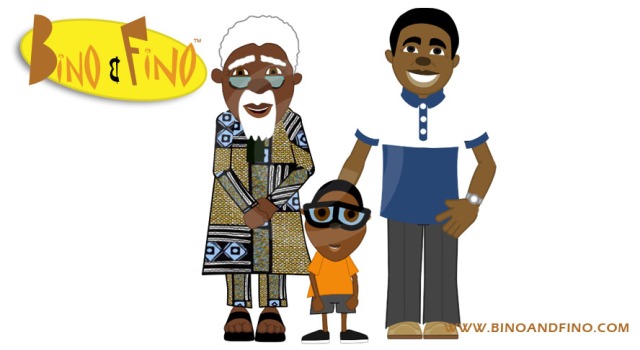 An interesting viewpoint which I agree with.

This post is part two of a series, which begins here: Preventing Our Children From Developing Demons (And Healing Our Own), in which I look at the ideas outlined in the book, Healing Developmental Trauma by Laurence Helller, PhD and Aline LaPierre, PsyD.

The writers outline Five Core Needs that babies are born with and biologically are built to have satisfied. From these we develop Five Capabilities Essential to Wellbeing or we develop combinations of one or more of the Five Survival  Styles with their associated Five Core Difficulties. From these I have extrapolated Five Key Tasks of Parenting, which we can use, as best we can, to ensure our children develop according to their biological expectations or which we can use to identify ways that we can help our children, after things haven’t gone according to the biological plan.

For the record, I am far from being the perfect…

We are doing a fundraiser to help us produce the new full season of Bino and Fino. This will be done using the Indiegogo online crowdfunding platform. The idea is to raise funds by giving people the chance to reserve copies of the new episodes when done, buy the current episodes plus get other goodies as well. For example you get some merchandise for kids and the chance for me to speak to students in your kids’ school about animation and the Bino and Fino show itself.

We have already started seeking for funds via other channels such as banks and investors. Crowdfunding one of many ways we are looking at. So help us spread the word. It’s going to be interesting to see how this goes. Every dollar counts. Creating a new African voice in children’s entertainment isn’t cheap 🙂

A Wonderful Bino and Fino Review

We recently got this video given to us at Bino and Fino HQ. These two smart young ladies told us what they loved about the show and things they would change about it. We absolutely loved it!

Why Are There Few Nigerian Kids Shows on Nigerian TV?

Before I start it I want to say that this post is not written in order to complain or point fingers. It is to answer one question I and everyone involved in the Bino and Fino project gets asked a lot by Nigerian fans of the show. ‘Why isn’t the Bino and Fino cartoon on Nigerian television?’

The best way to answer is to first explain how programmes get on to Television in Nigeria. In essence it is very simple. The major TV networks in Nigeria charge for airtime. Money dictates most of what you see on Nigerian television screens.  END_OF_DOCUMENT_TOKEN_TO_BE_REPLACED

This blog post is dedicated to all the little girls with curly hair. As mom to a young girl of African descent I have had many discussions about hair.  When she first went to school, my daughter soon began asking questions about blonde and straight hair.  We talked at length about the differences between her best friends hair (blonde, straight , unbraided) and her hair ( curly, black and braided).  I have always taught her that hair comes in many, many varieties.  This fact means that there are many different ways people will style their hair.   My daughter can now admire many different styles without any envy that her hair is not exactly the same.  This makes me happy.

Last year I came across a great article about creating an Afro  for Barbie.  I was pleasantly surprised because I have never seen a fashion doll with really curly hair.  Even way back when in the ’60s…

I love this little piece from Karen @ Kloppenmum about how children mimic parents. She touches on the positive and possibly negative aspects of it.

We mimic those around us from as early as 40 minutes old. I remember Craig holding a teeny-tiny Mr Hare in his arms and poking his tongue out at him – sure enough, within a very short space of time Mr Hare was returning the compliment. His mirror neurons had been ‘captured’ by Craig’s and his brain had created similar connections.

This ability to learn without realising we are learning can be very useful. The power of mimicry was recorded by Aristotle, and it seems logical that people were aware of it long before the Greeks ruled the world.

When Mr Owl, Mr Hare and I went outside to pick peaches on Sunday, this is what we saw:

Mr Butterfly was right in mimicry mode: hanging-out with Dad and learning about hammers. Mr B was learning in the most natural way a child learns [from another person] and I love seeing our kids in mimicry…

I just saw this. Thank you very much for the kind words and the mention about our Bino and Fino cartoon.

Our family is a multicultural family, including Mexican, white, Chinese, and Ethiopian roots. Among others, our kids love Dora and Diego (yay for Hispanic culture and Spanish language!), Ni Hao Kai-Lan (another cheer for Chinese culture and Mandarin words!)… but our littlest guy Ricky was feeling a little left out. Imagine my surprise today when I discovered Bino and Fino– a cartoon produced in Nigeria about 2 adorable kids here from a “modern day city in Africa” to share with us:

I am so excited about this series: an educational, African, kids cartoon!!!! Check out a preview of their first episode: